We often get asked about where we got our front doors and the answer is: from Scott's dad. In fact, the world was just beginning to shut down the weekend Scott's parents came down to deliver and install our doors in March of 2020.

My father-in-law, Brad, is an amazing woodworker. He works primarily on Victorian style houses, building doors, windows, and so much more. When we began our build we thought that asking Brad to build our doors would be a great way to not only get custom doors that were built to our specifications, but also a way to incorporate something meaningful and handmade by family to our home.

We used the photos above as our inspiration. Of course, Brad is used to doing much more intricate and detailed woodwork, so our door was a bit on the boring side for him. He kept asking if we wanted to add little details here and there. "Are you sure you just want plain squared-off edges?" he asked. Our taste is much more minimal and modern.

He started building the doors in the late fall of 2019, so luckily we were able to get a sneak peek of the door frame when we were home for Christmas that year. We also got to take a trip to a local hardware store to pick out our handles, hinges, and passive door locks. Picking out the handles and hinges was easy - we knew we wanted something modern with a matte black finish.

What turned out to be a little trickier was picking out the bolts for the passive door. The second door is primarily stationary, but we wanted the ability to open it to allow for a wider opening when moving larger furniture in and out of our home. Because of that, the passive door requires some additional locking mechanisms to keep it in place while using the active/primary door. I had NO desire to use a surface bolt. I thought they looked dated and I wanted to keep the doors as clean as possible. I also like symmetry, so I thought having a surface bolt on the top and bottom of one door, but not the other would look odd. Luckily, flush bolts are available, which are hidden inside the door. Unfortunately, because there is weatherstripping on the bottom of the door, a flush bolt wouldn't work there, so we had to compromise. We used a flush bolt on the top of the door and a surface bolt on the bottom. I was quite disappointed that we had to use a surface bolt, but now that it's been installed, I've grown to like it!

March of 2020 was when Scott's parents made the trek down here with the frame of our custom door strapped to the roof, and the door panels inside the bed of the truck. Brad is quite thoughtful and creative, so the door was packaged VERY well and did not sustain any damage on the trip down from Connecticut.

We didn't really know what to expect as far as installation was concerned, but it took nearly an entire day to get these doors in.

Much to Brad's dismay, we wanted our doors to be made of white oak, so they are quite heavy!

Just days after installing them they had to be removed so that they wouldn't get damaged during the remainder of our build. Of course, once they were reinstalled there was issues with the wood expanding and causing them not to close as well as they should. In the process of trying to route out the slot for the weather stripping (we were trying to make it deeper so that we could shave off the bottom of the door), the router jumped and took out a chunk of the door. If you've been following us on Instagram for awhile, you may remember seeing it in our stories. Needless to say, it was a tough, very unhappy night after that, but luckily it was fairly easy to fix and we honestly haven't even noticed it since! It just goes to show that not everything always goes flawlessly - mistakes are made, but they're an opportunity to learn and grow.

We are very appreciate that Brad was able to make our front doors and so happy that we'll have them in our home forever! Did you incorporate any special details or meaningful items into your build? 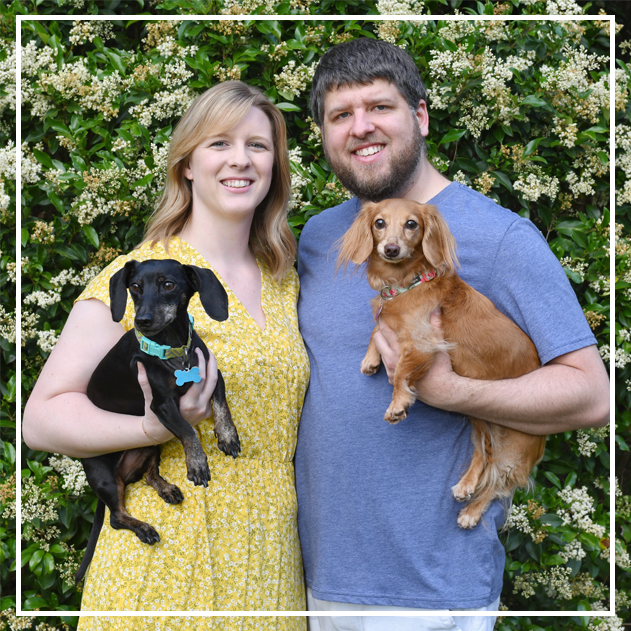